The Second Planck Catalogue of Compact Sources will be available in the next release of the Planck 2015 results.

The Planck SZ catalogue is constructed as described in SZ catalogue and in sections 2 and 3 of Planck-2015-A27[1]. Three pipelines are used to detect SZ clusters: two independent implementations of the Matched Multi-Filter (MMF1 and MMF3), and PowellSnakes (PwS). The main catalogue is constructed as the union of the catalogues from the three detection methods. The completeness and reliability of the catalogues have been assessed through internal and external validation as described in section 4 of Planck-2015-A27[1].

The size of a detection is given in terms of the scale size, θs, and the flux is given in terms of the total integrated Comptonization parameter, Y = Y5R500. The parameters of the GNFW profile assumed by the detection pipelines are written in the headers of the catalogues. For the sake of convenience, the conversion factor from Y to Y500 is also provided in the header.

The union catalogue contains the coordinates of a detection, its signal-to-noise ratio, an estimate of Y and its uncertainty, together with a summary of the validation information, including external identification of a cluster and its redshift if they are available. The pipeline from which the information is taken is called the reference pipeline. If more than one pipeline makes the same detection, the information is taken from the the pipeline that makes the most significant detection. Where the redshift is known, we provide the SZ mass for the reference pipeline.

The individual catalogues contain the coordinates and the signal-to-noise ratio of the detections, and information on the size and flux of the detections. The entries are cross-referenced to the detections in the union catalogue. The full information on the degeneracy between θs and Y is included in the individual catalogues in the form of the two-dimensional probability distribution for each detection. It is computed on a well-sampled grid to produce a two-dimensional image for each detection. It is provided in this form so it can be combined with a model or external data to produce tighter constraints on the parameters. The individual catalogues also contain Planck measurements of the SZ mass observable, MSZ, as calculated using a Y-M scaling relation and an assumed redshift to break the Y-θs degeneracy. These are provided for each detection as functions of assumed redshift, in the range 0.01 < z < 1, along with the upper and lower 68% confidence limits.

The selection function of the union catalogue, the intersection catalogue and the individual catalogues are provided in additional files. The selection function files contains the probability of detection for clusters of given intrinsic parameters θ500 and Y500. The file includes the definition of the survey area in the form of a HEALPix mask, and is evaluated for a range of signal-to-noise thresholds between 4.5 and 10.

The union catalogue is contained in HFI_PCCS_SZ-union_R2.08.fits.

The selection function for the union, intersection and individual pipeline catalogues are contained in the FITS files:

The catalogue of Planck Galactic Cold Clumps (PGCC) is a list of 13188 Galactic sources and 54 sources located in the Small and Large Magellanic Clouds. The sources have been identified in Planck data as sources colder than their environment. It has been buit using the 48 months Planck data at 857, 545, and 353 GHz combined with the 3 THz IRAS data, as it is described in Planck-2015-A28[2].

The all-sky distribution of the PGCC sources is shown below on top of the 857 GHz emission shown in logarithmic scale between 10-2 to 102 MJy/sr.

All-sky distribution of the PGCC sources.

Sources are divided into three categories based on the reliability of the flux density estimates in IRAS 3 THz and Planck 857, 545, and 353 GHz bands.

The all-sky distributions of the PGCC sources per FLUX_QUALITY category are shown below on top of the 857 GHz map in grey scale shown in logarithmic scale between 10-2 to 102 MJy/sr. 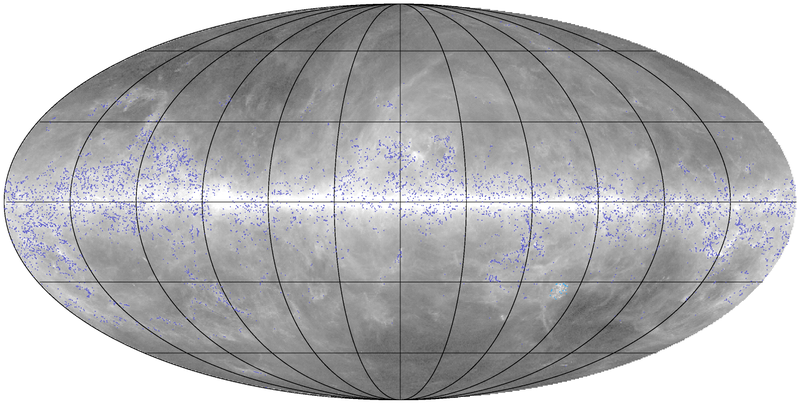 All-sky distribution of the PGCC sources with FLUX_QUALITY=1. 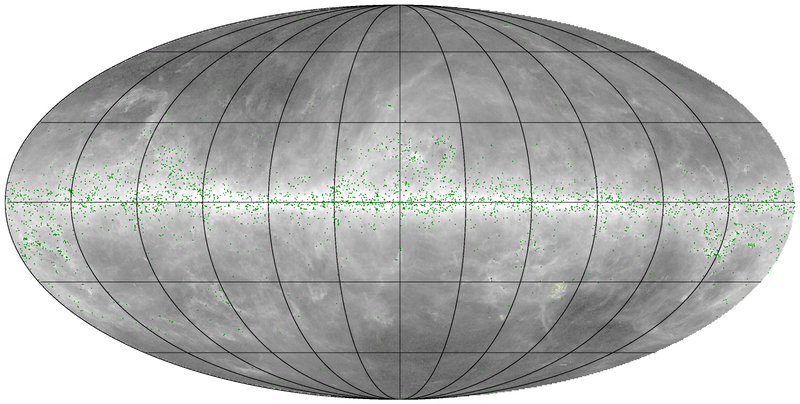 All-sky distribution of the PGCC sources with FLUX_QUALITY=2. 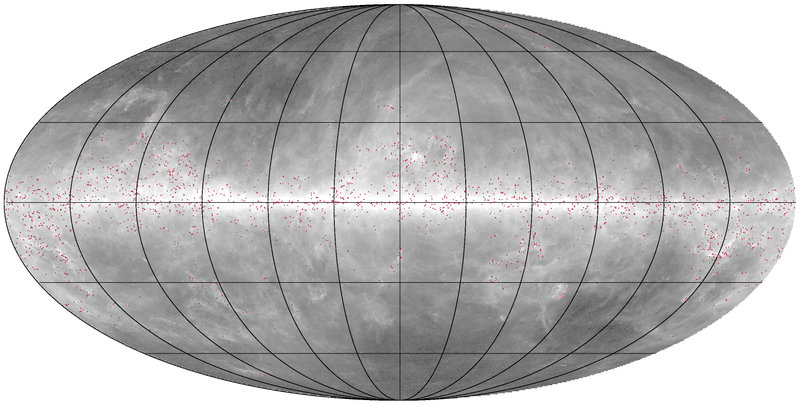 All-sky distribution of the PGCC sources with FLUX_QUALITY=3.

Distance estimates have been obtained on 5574 PGCC sources using seven different methods/technics, as described in Planck-2015-A28[2]. A flag is raised to quantify the quality of the distance estimates, defined as follows:

The all-sky distribution of the sources with robust distance estimates is shown below. 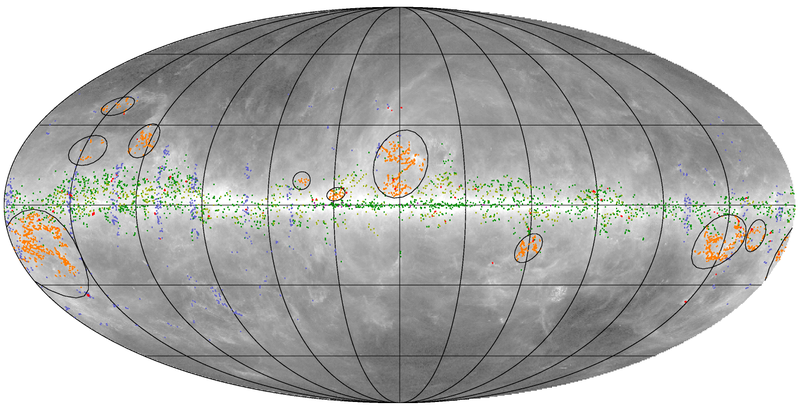 All-sky distribution of the 4655 PGCC sources for which a distance estimate with a DIST_QUALITY flag equal to 1 or 2 is available. The various types of distance estimates are defined as follows : kinematic (purple), optical extinction (blue), near-infrared extinction (green), molecular complex association (orange), and Herschel HKP-GCC (red). We also show the distribution of the 664 sources with an upper-limit estimate (DIST_QUALITY=4) provided by the near-infrared extinction method (light green). Molecular complexes are outlined with black contours.

The catalogue is contained in the FITS file HFI_PCCS_GCC_R2.02.fits. It structure is as follows: