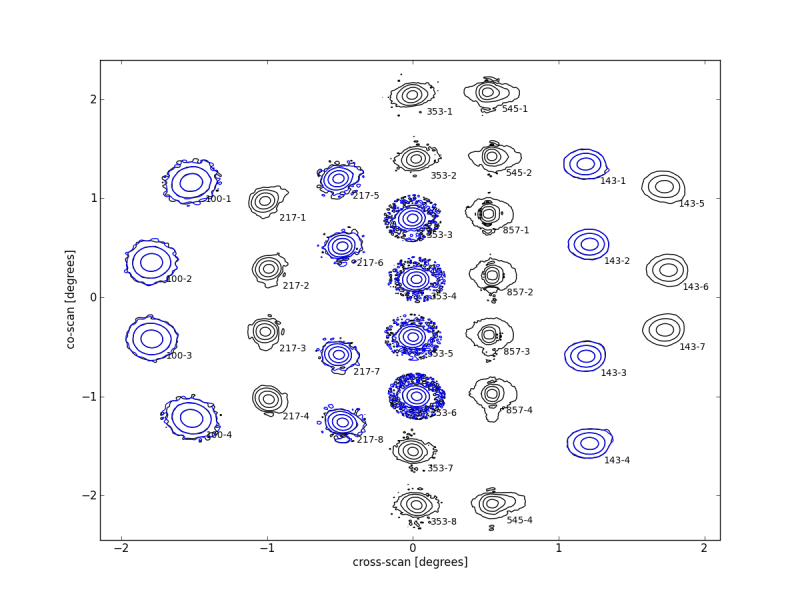 Figure 1: Focal plane plot of B-Spline scanning beams using in-flight pointing reconstruction. The contours are -3,-10,-20,-30 dB from the peak, and for PSB pairs the "a" bolometer is plotted in black and "b" in blue.

The Planck reflectors suffer from print-through of the honeycomb structures that support the carbon-fibre face sheets [1], [2], [3].

Since the HFI beams are not azimuthally symmetric, the scanning strategy has to be taken into account in the effective beam response modelling. This is done using the FICSBell method (Hivon et al, in preparation), which generalizes to polarization and to include other sources of systematics the approach used for TT [math]C(l)[/math] estimation in WMAP-3yr #hinshaw2007 and by Smith et al (2007)#smith2007 in the detection of CMB lensing in WMAP maps. The different steps of the method used for this study can be summarized as follows:

Planck observes the sky after convolution with a “scanning beam”, which captures its effective response to the sky as a function of displacement from the nominal pointing direction. Decomposing the scanning beam into harmonic coefficients [math]B_{lm}[/math], each time-ordered data (TOD) sample can be modelled as (neglecting the contribution from instrumental noise, which is independent of beam asymmetry) [math]%T_i = \sum_{lms} D^{l}_{-m s} (\phi_i, \theta_i, \alpha_i) b_{ls} (-1)^{m) T_{lm} + n_i, T_i = \sum_{lms} e^{-i s \alpha_i} B_{ls} \tilde{T}_{lm} {}_s Y_{lm}(\theta_i, \phi_i), \label{eqn:tod_beam}[/math] where the TOD samples are indexed by [math]i[/math], and [math]\tilde{T}_{lm}[/math] is the underlying sky signal. The spin spherical harmonic [math]{}_s Y_{lm}[/math] rotates the scanning beam to the pointing location [math](\theta, \phi)[/math], while the [math]e^{-i s \alpha_i}[/math] factor gives it the correct orientation. Eq. may be evaluated with the “TotalConvolver” algorithm of Wandelt and Gorski (2001)#wandelt2001, accelerated using the “conviqt” recursion relations Prezeau and Reinecke (2010)#prezeau2010 This approach is implemented in LevelS. </ref>, although because it involves working with a TOD-sized objected it is necessarily slow.

Planck-HFI maps are produced at HEALPix resolution 11 [math](N_{\rm side} = 2048)[/math], corresponding to pixels with a typical dimension of [math]1.7'[/math]. With the resolution comparable to the spacing between scanning rings there is an uneven distribution of hits within pixels, introducing a complication in the analysis and interpretation of the Planck maps. A sample of the Planck distribution of sample hits within pixels is illustrated in Fig. 2. 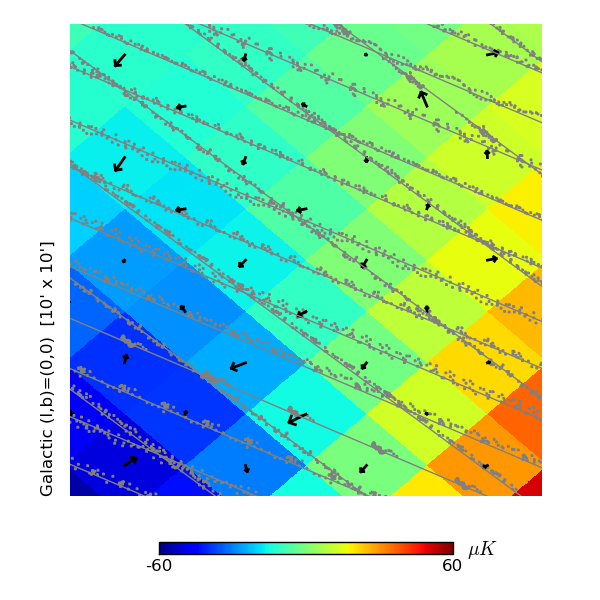 Figure 2: Illustration of TOI samples near the Galactic plane (gray dots), over-plotted on a simulated CMB realization which has been convolved with a Gaussian 7' FWHM beam and pixelized at $(N_{\rm side} = 2048)$. Associated scanning rings (gray lines) as well as centers of mass for the hit distribution (black arrows) are also plotted.

The collaboration has produced 3 codes which may be used to simulate the effect of pixelization on the observed sky, LevelS/TotalConvoler/Conviqt#reinecke2006 #wandelt2001 #prezeau2010, FeBeCoP#mitra2010, and FICSBell further discussion of the three methods and how they each simulate the pixelization effect..

For the measurement of CMB fluctuations, the effects of pixelization may be studied analytically. On the small scales relevant to pixelization, the observed CMB is smooth, both due to physical damping as well as the convolution of the instrumental beam. Taylor expanding the CMB temperature about a pixel center to second order, the typical gradient amplitude is given by [math]\langle |\nabla T |^2 \rangle = \frac{1}{4\pi} \sum_{l} l(l+1)(2l+1) C_l^{T} W_l \approx 1\times10^9 \mu K^2 / {\rm rad}^2.[/math] where the approximate value is calculated for a [math]\Lambda[/math] CDM cosmology with a [math]7'[/math]FWHM Gaussian beam. The typical curvature of the observed temperature, on the other hand is given by [math]\langle |\nabla^2 T |^2 \rangle = \frac{1}{4\pi} \sum_{l} [l(l+1)]^2(2l+1) C_l^{T} W_l \approx 7\times10^{14} \mu K^2 / {\rm rad}^4.[/math] On the scales relevant to the maximum displacement from the center of a [math]1.7'[/math] pixel, the maximum displacement is [math]{\cal O}(1' = 3\times10^{-4} {\rm rad})[/math], and so the gradient term tends to dominate, although the curvature term is still non-negligible. For each observation of a pixel, we can denote the displacement from the pixel center as [math]d = d_{\theta} + i d_{\phi}[/math]. The average over all hits within a pixel gives an overall deflection vector which we will denote for a pixel center located at [math]\hat{n}[/math] as [math]d(\hat{n})[/math]. This represents the center of mass of the hit distribution; Fig. 2 shows these average deflections using black arrows. The deflection field [math]d(\hat{n})[/math] may be decomposed into spin-1 spherical harmonics as [math]d_{lm} = \int_{4\pi} {}_1 Y_{lm}^* d(\hat{n}).[/math] With a second order Taylor expansion of the CMB temperature about each pixel center, it is then possible to calculate the average pseudo-Cl power spectrum of the pixelized sky. This is given by

where [math]R^{d} = \langle |d|^2 \rangle/2[/math] is half the mean-squared deflection magnitude (averaged over hits within a pixel, as well as over pixels). [math]C_l^{d+}[/math] is the sum of the gradient and curl power spectra of [math]d_{lm}[/math], and [math]C_l^{d-}[/math] is the gradient spectrum minus the curl spectrum. The [math]R^{d}[/math] term describes a smearing of the observed sky due to pixelization. For uniform pixel coverage of [math]N_{\rm side}=2048[/math] pixels [math]\sqrt{ \langle |d|^2 \rangle } = 0.725'[/math] while, for the hit distribution of Planck frequency maps, [math]R^{d}[/math] is typically within 0.2% of this value for CMB channels, and 0.4% for all channels. This term is therefore accurately described by the HEALPix pixel window function, which is derived under the assumption of uniform pixel coverage, and the resulting relative error on the beam window function is at most [math]4\times 10^{-4}[/math] for [math]\ell \le 3000[/math].

The effect of pixelization is essentially degenerate with that of gravitational lensing of the CMB, with the difference that it (1) acts on the beam-convolved sky, rather than the actual sky and (2) produces a curl-mode deflection field as well as a gradient mode. This is discussed further in the Planck gravitational lensing#planck2013-p12 paper, where the subpixel deflection field constitutes a potential source of bias for the measured lensing potential. Indeed, Eq. \ref{eqn:clt_pixelized} is just a slightly modified version of the usual first order CMB lensing power spectrum Hu (2000)#Hu2000, Lewis and Challinor (2006)#Lewis2006 to accommodate curl modes.

A useful approximation to Eq. \ref{eqn:clt_pixelized} which is derived in the unrealistic limit that the deflection vectors are uncorrelated between pixels, but in practice gives a good description of the power induced by the pixelization, is that the [math]d(\hat{n})[/math] couples the CMB gradient into a source of noise with an effective level given by [math]\sigma^{N} \approx \sqrt{ R^T \frac{4\pi}{N_{\rm pix}} \langle | d(\hat{n}) |^2 \rangle }, % (\muKarcmin ),[/math]

where the average is taken over all pixels and [math]R^T[/math] is half the mean-squared power in the CMB gradient: [math]R^{T} = \frac{1}{8\pi} \sum_{l} l(l+1)(2l+1) \tilde{C}_l^{T}.[/math] For frequency-combined maps, [math]\sqrt{ \langle | d(\hat{n}) |^2 \rangle }[/math] is typically on the order of [math]0.1'[/math], and so the induced noise is at the level of [math]\sigma^{N} \sim 2 \mu[/math]K arcmin. This is small compared to the instrumental contribution, although it does not disappear when taking cross-spectra, depending on how coherent the hit distributions of the two maps in the cross-spectrum are.