We released maps of the Stokes parameters of the band-averaged scanning beams. The averages are performed using the RIMO bandpass, assuming a flat spectrum of the incoming radiation. The Stokes parameters maps contain the complete information about the field intensity and polarization properties. Main Beam, Intermediate Beam, and Sidelobes are released separately.

The file names are of the form:

At the present time, HFI is not releasing the Scanning Beams.

Main Beam, Intermediate Beams and Sidelobes are saved with a different data format:

The HFI scanning beams are a combination of observations of Saturn, for the central parts, and Jupiter, for the wings, as described in the Beams section of this document, and in Section 4.1 of Planck-2015-A07[2] on Hybrid beams. Saturn data are used where they are signal-dominated; when the SNR of Saturn drops to < 9, Jupiter data are used, after binning them azimuthally. Beyond that, i.e., below the noise floor of the Jupiter data, and out to 100 arcmin, a power law (~θ -3) is used, where the exponent is derived from GRASP physical optics models. The figure below, taken from the Beams section of this document, shows graphically the different portions of the beam model. 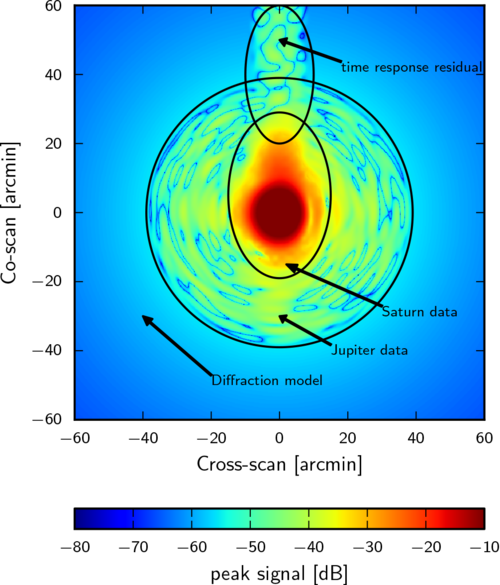 Scanning beam map for detector 143-6 showing a rough diagram of the regions that are handled with a different data selection or binning.

The beams are provided in FITS files named

where det-name is of the form 100-1a, and nn is the version number. Each file contains a single IMAGE extension. The image is 6001x6001 pixels of size 2x2 arcsec2 (given in the DELTAX and DELTAY keywords), centred on pixel 3001,3001, and normalised to 1 at the maximum, where X and Y and in the Dxx reference system.