The HFI science data is retrieved and reconstructed as described in section 3.1 of #planck2011-1-7 Planck early paper VI .

The first stage of HFI data processing is performed on-board in order to generate the telemetry. This is described in the HFI_detection_chain#Data_compression section.

The two plots show the histogram of time differences between two successive samples for the full mission. 6 samples intervals ( > 6 ms) correspond to 3 occurences of packets lost on board when the on board sofwtare of the Command and Data Management Unit has been patched (18, 19 and 20th of August 2009). The right plot is a blow up of the left one. It shows the distribution around the mean value of 5,54 ms and the 15 μs quantization step.

Note HFI ring : a ring corresponds to a duration during each stable pointing period, when the spin axis is pointing towards an essentially fixed direction in the sky and the detectors repeatedly scan the same circle on the sky. More precisely the HFI ring start time is defined as the time of the first thurster firing. The end time of the HFI ring is the start time of the following ring. 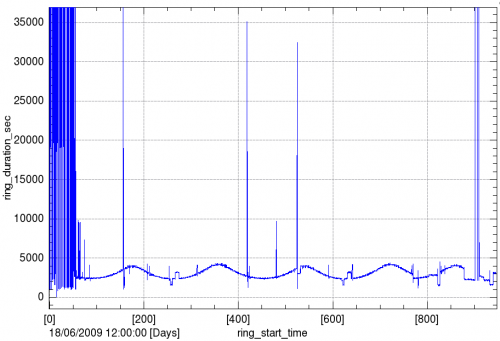 Satellite orbit velocity is built by the MOC Flight Dynamics team and made available to the HFI DPC via orbit files. See Orbit description document and orbit files repository. As those orbit files contain both effective and predictive data, they are regularly ingested updated in the HFI database.
Note: these same data are also ingested in parallel into the NASA JPL Horizons system (http://ssd.jpl.nasa.gov/) under ESA’s responsibility.

The MOC is responsible for providing information about the relationship between the satellite On Board Time (OBT) and Coordinated Universal Time (UTC). This information comes via several measurements of OBT and UTC pairs each day, measured during the satellite ranging. See Time Correlation document and [refer to the PLA TCO folders] Time Correlation files repository.

Note: The extra couple on the 1st of June 2010 is not significant and due to a misconfiguration of the ground station parameters. 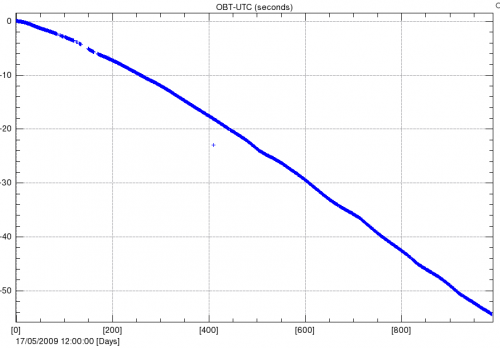