To build HFI maps, we use the destriping approximation, in which noise is assumed to decompose into two components : white noise plus low frequency drifts. Using the sky redundancy, the low frequency drifts are modelled as one constant, or offset, per pointing period. To speed up the ulterior processing we first build intermediate products, by taking advantage of redundancies : we average signal and detector orientation on healpix pixels visited during each fixed pointing period, which we call hereafter 'ring'. Detector's pointing are corrected for slow drifts and aberration (displacement on the sky indouced by the satellite's motion). This intermediate product is called HPR for healpix pixel ring. They have been constructed using the same map resolution as the final HFI products (corresponding to [math]N_{\mathrm side}[/math]=2048). This new dataset is used as input in the following steps.

For the 2015 data release, the HFI CMB channels were calibrated using the orbital dipole modulation. This time-variable anisotropy results from the motion of the spacecraft in the solar system, which is precisely measured. Thus it provides an absolute calibrator for orbital CMB missions. Its measurement is now used to calibrate HFI data thanks to the improvements in the timne stability of the data brought by the ADC non-linearities corrections and a better control for the detectors time response.

Residual time response slow components are modeled as a dipole shifted by 90 degrees in phase, whose amplitude is fitted bolometer per bolometer. To mitigate residual systematics, we perform a simultaneous fit of the detectors gains on the orbital dipole. This amounts to solve the non-linear equation : [math] \displaystyle{d\ =\ g_i.(S+D) + O_i + n} \label{nlequat}[/math]

where d is s the detector measurement, D the total dipole component, n the (white) noise, and both S the sky signal, g the detector gain, O the offset (for ring no i) are the unknowns to be determined. This is done by linearizing it to look for gains and sky variations, and iterating by updating the approximate sky and gains.

We therefore the sub-mm channels' calibration for the 2015 Planck data release from the comparison of measurements of the Neptune and Uranus fluxes (with aperture photometry) with their expectations from the Moreno et al model of their atmospheres' emission. This procedure is justified, since for both planets, at the lower frequencies (100-353 Ghz), the fluxes we recover are in agreement within ~ +/-5\% with what is expected from the planet spectral model, and the HFI detector's band-passes.

We determined zero-level for the released maps in selected regions of the sky where dust emissions are low and well correlated with HI. We may thus estimate and subtract dust emissions using the HI template, and CMB from a Planck component-separated template. The remaining astrophysical zero level is that of CIB. By imposing that the level we find is equal to that of the CIB model of Bethermin et al, we set the zero level of our maps.

[math] \displaystyle{d_i = g(I^p+\eta [Q^p cos(2\psi_i) + U^p sin(2\psi_i)]) + n} \label{photeq}[/math] where d is the destriped and calibrated signal at the HPR level. Detector's data are combined with an inverse noise weights derived from each detector's NEP. Q and U maps are build whenever possible. We propagate the white noise by building the 3x3 (or 1x1 if only I is reconstructed) covariance matrices in each pixel. At each frequency we build maps combining all detectors and independent detector sets. We use the offsets build for the full mission for building maps for each scan survey, year (sombineation of surveys 1 and 2 or 3 and 4 respectively) and for the full, nominal mission duration and its two halves. We also build maps from the two independent halves of each rings. Altogether, more than 8000 maps are built at each release.

Map noise properties can be evaluated using several methods, thanks to the high level of observation redundancies. We can use the maps built from the difference between the first and second half of each rings, or compare individual sky scans, years, half-mission or independent detector sets with each other. Some of these tests are described in Planck-2015-VIII ref. 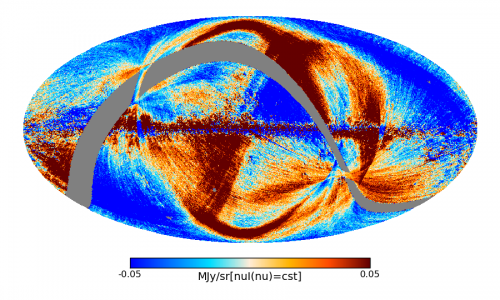 For the 2015 Planck release, zodiacal light emission is removed from all HFI channels. The general procedure is described in Planck-2013-VI[1], but a synopsis of the procedure is as follows:

Contrary to the 2013 Planck release, Far Sidelobes were not removed from the HFI data for the 2015 Planck release. The change of the gain due to neglect of the far sidelobes is calculated by fitting the dipole to full timeline simulations of the dipole convolved by the FSL. The correction factors applied to the data are 0.09 % at 100 GHz, 0.05 % at 143 GHz, 0.04 % at 217 GHz and negligible at 353 GHz. Corrections were not made at 545 and 857 GHz (see Planck-2015-VIII for details).

Carbon monoxide rotational transition line emission is present in all HFI bands but for the 143 GHz channel. It is especially significant in the 100, 217 and 353 GHz channels (due to the 115 (1-0), 230 (2-1) and 345 GHz (3-2) CO transitions). This emission comes essentially from the Galactic interstellar medium and is mainly located at low and intermediate Galactic latitudes. Three approaches (summarised below) have been used to extract CO velocity integrated emission maps from HFI maps and to generate the CO products. See Planck-2013-XIII and Planck-2015-X for a full description.

line has a slightly different transmission in each bolometer at a given frequency channel. From this, the J=1-0, J=2-1 and J=3-2 CO lines can be extracted independently. As this approach is based on individual bolometer maps of a single channel, the resulting Signal-to-Noise ratio (SNR) is relatively low. The benefit, however, is that these maps do not suffer from contamination from other HFI channels (as is the case for the other approaches) and are more reliable, especially in the Galactic plane.

frequency channel maps are combined to extract the J=1-0 (using the 100, 143 and 353 GHz channels) and J=2-1 (using the 143, 217 and 353 GHz channels) CO maps. As frequency maps are combined, the spectral behaviour of other foregrounds influences the result. The two Type 2 CO maps produced in this way have a higher SNR than the Type 1 maps at the cost of a larger residual contamination from other diffuse foregrounds.

The 2015 Type 1 and Type 2 CO maps have been produced using the same procedure as for the 2013 results. Very similar to their 2013 counterparts, the 2015 maps benefit from an increased SNR due to the use of the full, rather than nominal, mission data.  Characteristics of the released maps are the following. We provide Healpix maps with Nside=2048. For one transition, the CO velocity-integrated line signal map is given in K_RJ.km/s units. A conversion factor from this unit to the native unit of HFI maps (K_CMB) is provided in the header of the data files and in the RIMO. Four maps are given per transition and per type:  * The signal map

made out of half the difference of half-ring maps.

reliable because of some severe identified foreground contamination.  All products of a given type belong to a single file. Type 1 products have the native HFI resolution i.e. approximately 10, 5 and 5 arcminutes for the CO 1-0, 2-1, 3-2 transitions respectively. Type 2 products have a 15 arcminute resolution.  We refer the reader to [le lien vers la section avant-plans de Commander] for a description and characteristics of the Commander CO products.

Further checks are presented in the likelihood, params, comsep and commander papers refs .