Here we report a brief summary of these effects, all the details can be found in #planck2013-p02a Planck-2013-III . 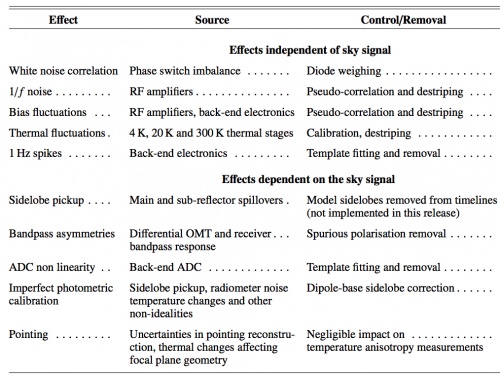 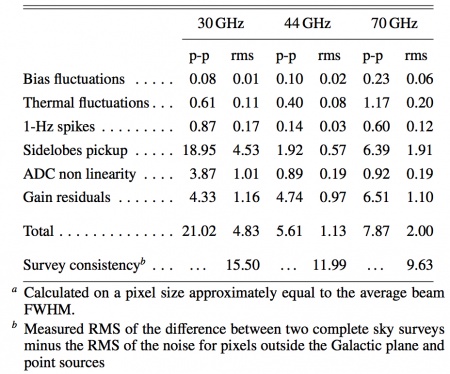 Angular power spectra have been obtained from full resolution (Nside = 1024) systematic effect maps at each frequency using HEALPix Anafast (#gorski2005). We have then evaluated the propagation of the various effects in the final CMB map by assuming a simple ILC component separation. In Fig. 1 we show how the power spectrum of the various effects compared with the Planck temperature spectrum, with the noise level coming from the half-ring difference maps and with the residual map obtained from a difference map between survey 1 and survey 2. The large plot in the top panel shows the power spectra obtained from frequency-independent maps resulting from the weighted-average of frequency maps. Spectra in the three small plots in the lower panel, instead, show contributions of systematic effects from individual frequency maps.

As described in #seiffert2002, planck2011-1-4 imperfect matching of components generates isolation between the complementary diodes of a receiver between −10 and −15 dB. This imperfect isolation leads to a small anti correlated component in the white noise that is cancelled by a weighted average of the time ordered data from the two diodes of each receiver as the first step of analysis. This avoids the complication of tracking the anti correlated white noise throughout the analysis. We treat the combined diode data as the raw data, and calibration, noise estimation, map making etc. are performed on these combined data. The weights were determined from some initial estimates of the calibrated noise for each detector, and are kept fixed for the entire mission.

This effect is caused by pickup from the housekeeping electronics clock that occurs after the detector diodes and before the ADC converters (#meinhold2009, mennella2010, mennella2011). This spurious signal is detected in the radiometer time-domain outputs as a one second square wave with a rising edge near 0.5 s and a falling edge near 0.75 s in on-board time. In the frequency domain it appears at multiples of 1 Hz. Frequency spikes are present at some level in the output from all detectors, but affect the 44 GHz data most strongly because of the low voltage output and high post-detection gain values in that channel. For this reason spikes are removed from the 44 GHz time-ordered data via template fitting, as described in #planck2013-p02 Planck-2013-II .

Straylight impacts the measured signal essentially in two ways: (i) through direct contamination and coupling with the main beam sky signal and (ii) in the photometric calibration of the radiometer detected signal. The impact on calibration and the adopted mitigation strategies are described in #planck2013-p02b Planck-2013-V . Because of the beam orientation, the straylight fingerprint is different in odd surveys compared to even surveys. The Galaxy, for example, is detected by the sub spillover in the odd surveys and by the main spillover in the even surveys. Because the sub spillover points approximately in the main beam direction, the Galaxy straylight pattern is close to the galactic plane. The main spillover, instead, points at about 85 degrees from the main beam so that the Galaxy is re-imaged onto a ring.

The typical fingerprint of ADC non linearity is a variation of the detector voltage output white noise not paired by a detectable variation in the voltage level. This effect was observed in the LFI radiometer data for the first time in flight, where drops of few percent were observed in the voltage white noise but not in the output level over periods of few weeks. The typical amplitude of the region where the non linearity occurs is of the order of 1 mV, corresponding to about three bits in the ADC. The ADC effect is strongest (3 to 6%) in the 44 GHz channels, because of their lower detector voltages. The ADC non linearity effect has been characterised from flight data and removed from the TOIs according to the procedure described in the main LFI data processing paper #planck2013-p02 Planck-2013-II .