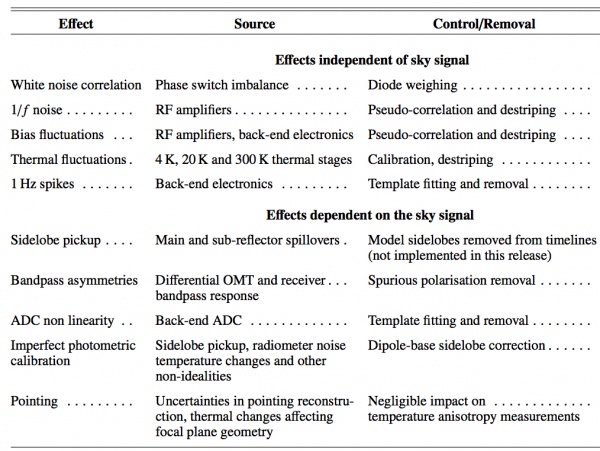 The LFI is susceptible to temperature fluctuations in the 300 K back-end modules, in the 4 K reference loads and in the 20 K focal plane. Details about the thermal stability performance of Planck can be found in #planck2011-1-3, while the susceptibility of the LFI to temperature variations is discussed in #terenzi2009.

Straylight contamination arise from the spurious signal pickup from the telescope far sidelobes. Main sources of straylight contamination are the Galaxy, especially at 30 GHz, and the cosmological dipole, mainly detected in the directions of the main and sub reflectors spillover, as sketched in Fig. 8. In principle we should also include the straylight contribution from the orbital dipole, but its effect is of a factor ten lower than the cosmic dipole so that it can safely be neglected in this framework (but it has been considered in the calibration pipeline). Further details about the Planck optical system are reported in #tauber2010 and the LFI beam properties are provided in #Sandri2010.

Straylight impacts the measured signal essentially in two ways: (i) through direct contamination and coupling with the main beam sky signal and (ii) in the photometric calibration of the radiometer detected signal. The impact on calibration and the adopted mitigation strategies are described in #planck2013-p05. Because of the beam orientation, the straylight fingerprint is different in odd surveys compared to even surveys. The Galaxy, for example, is detected by the sub spillover in the odd surveys and by the main spillover in the even surveys. Because the sub spillover points approximately in the main beam direction, the Galaxy straylight pattern is close to the galactic plane. The main spillover, instead, points at about 85 degrees from the main beam so that the Galaxy is re-imaged onto a ring.

(b) Uncertainties in the focal plane geometry reconstruction. The measurement of Planck-LFI focal plane geometry is based on the determination of the beam pointing with respect to the nominal line of sight exploiting Jupiter observation. The peak of each beam has been determined by fitting data with a bivariate gaussian function which may be not representative of the real beam centre.