The Planck-LFI instrument is an array of 11 radiometric receivers in the Ka, Q and V bands, with centre frequencies close to 30, 44 and 70 GHz. The exact centre frequencies for each receiver are reported in \cite{mennella2011}; for simplicity, in this paper we will refer to the three channels using their nominal centre frequency. A detailed description of the LFI instrument is given in [M. Bersanelli, N. Mandolesi, R. C. Butler et al. Planck pre-launch status: Design and description of the Low Frequency Instrument. A&A, 520:A4, 2010], and references therein. 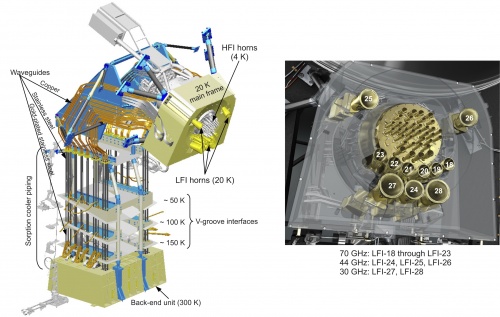 As shown schematically in figure below, the LFI consists of the following subsystems: • Radiometer Array Assembly (RAA) • Sorption Cooler Subsystem (SCS) • Radiometer Electronics Box Assembly (REBA) The RAA includes the Front End Unit (FEU) and the Back End Unit (BEU), connected via waveguides. The FEU is located at the focus of the telescope, as one component of the joint LFI/HFI focal assembly (see Section 3.4). The BEU is mounted on the top of the Planck SVM. The Radiometer Electronics Box Assembly (REBA) and the warm parts of the Sorption Cooler System (SCS) is located on one of the lateral panels of the service module (SVM). The FEU and the Sorption Cooler Compressor (SCC) are connected by concentric stainless steel tubes. The smaller tube carries hydrogen at ∼60 atmospheres from the cooler compressors to the FEU, while the larger tube returns the hydrogen at ∼0.3 atmospheres. These units are described in detail in following sections. All LFI units are linked together by the LFI harness, which also connects to the spacecraft interface. 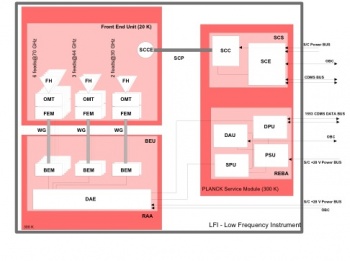 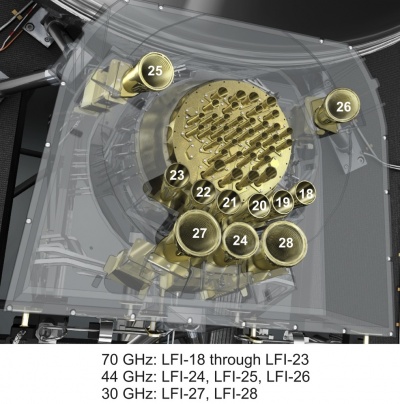 Figure 3 provides a more detailed description of each radiometric receiver. In each RCA, the two perpendicular linear polarisation components split by the OMT propagate through two independent pseudo-correlation differential radiometers, labelled as M or S depending on the arm of the OMT they are connected to (``Main or ``Side, see lower-left inset of Figure 3).

In each radiometer the sky signal coming from the OMT output is continuously compared with a stable 4 K blackbody reference load mounted on the external shield of the HFI 4 K box [L. Valenziano, F. Cuttaia, A. De Rosa et al. Planck-LFI: design and performance of the 4 Kelvin Reference Load Unit. Journal of Instrumentation, 4:2006, 2009.]. After being summed by a first hybrid coupler, the two signals are amplified by ~30 dB, see upper-left inset of Figure 3. The amplifiers were selected for best operation at low drain voltages and for gain and phase match between paired radiometer legs, which is crucial for good balance. Each amplifier is labelled with codes 1, 2 so that the four outputs of the LNAs can be named with the sequence: M1, M2 (radiometer M) and S1, S2 (radiometer S). Tight mass and power constraints called for a simple design of the Data Acquisition Electronics (DAE) box so that power bias lines were divided into five common-grounded power groups with no bias voltage readouts; only the total drain current flowing through the front-end amplifiers is measured and is available to the house-keeping telemetr(This design has important implications for front-end bias tuning, which depends critically on the satellite electrical and thermal configuration and was repeated at all integration stages, during on-ground and in-flight satellite tests). A phase shift alternating between 0<math>^o<\math> and 180<math>^o<\math> at the frequency of 4096 Hz is applied in one of the two amplification chains and then a second hybrid coupler separates back the sky and reference load components that are further amplified and detected in the warm BEU, with a voltage output ranging from -2.5 V to +2.5 V. 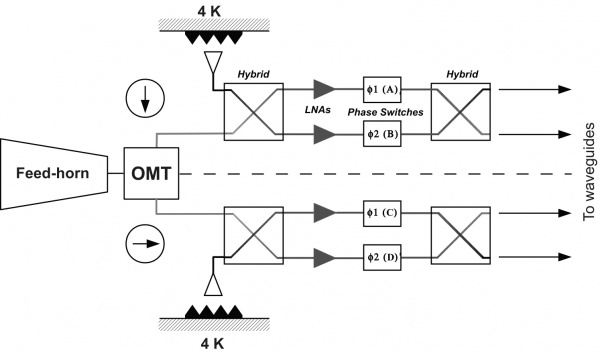