Difference between revisions of "L3 LFI"

LFI temperature power spectra are computed from frequency maps using a cROMAster, a implementation of the pseudo-[math] C_\ell[/math] method described in #master extended to derive both auto- and cross-power spectra (see #polenta_CrossSpectra) for a comparison between the two estimators). Noise bias and covariance matrix have been computed through the Full Focal Plane Simulations version 6 FFP6, that include 1000 realization of both signal and noise maps consistent with Planck data. The angular response of the instrument is accounted for by using the beam window functions presented in #planck2013-p02d Planck-2013-IV . Coupling kernels to correct for uncompleted sky coverage are computed as described in Annex. B of #planck2013-p08 Planck-2013-XV . We have masked Galactic plane and point sources using masks described in Sec. 3 of #planck2013-p06 Planck-2013-XII . In particular, we have used the 70% Galactic mask for 44 and 70 GHz, while we have used the 60% Galactic mask for 30 GHz. We report in Fig. 1 the 30, 44, and 70 GHz temperature power spectra. These have been produced from frequency maps without performing component separation. Nevertheless, there is a clear agreement between the observed spectra and the Planck Likelihood Code bestfit #planck2013-p08 Planck-2013-XV when adding a simple foreground component to account for unresolved point source residuals. 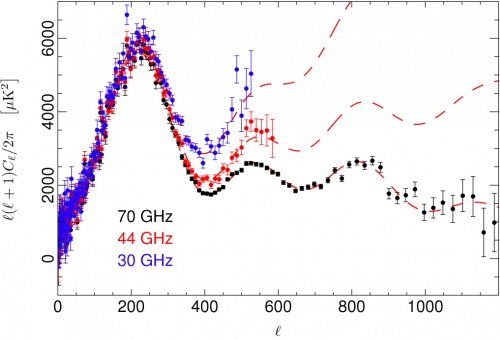 Figure 1. Temperature power spectra at 30, 44 and 70 GHz. Dashed lines correspond to the Planck Likelihood Code best-fit plus a foreground component to account for unresolved point sources.