We define a compression slice of 254 SREU values, corresponding to about 1.4 s of observation for each detector and to a strip on the sky about 8° long. The mean <SREU> of the data within each compression slice is computed, and data are demodulated using this mean:

where 1<i<254 is the running index within the compression slice.

The mean <Sdemod> of the demodulated data Sdemod,i is computed and subtracted, and the resulting slice data are quantized according to a step size Q that is fixed per detector:

This is the lossy part of the algorithm: the required compression factor, obtained through the tuning of the quantization step Q, adds a noise of variance approximately 2% to the data. This will be discussed below.

The two means <SREU> and <Sdemod> are computed as 32-bit words and sent through the telemetry, together with the [math]S_{{\rm DPU},i}[/math] values. Variable-length encoding of the SDPUi values is performed on board, and the inverse decoding is applied on the ground.

Optimal use of the bandpass available for the downlink was obtained initially by using a value of Q = σ/2.5 for all bolometer signals. After the 12th of December 2009, and only for the 857 GHz detectors, the value was reset to Q = σ/2.0 to avoid data loss due to exceeding the limit of the downlink rate. With these settings the load during the mission never exceeded the allowed bandpass width, as is seen on the next figure. 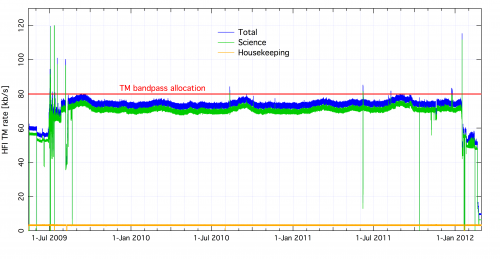 Evolution of the total load during the mission for the 72 HFI channels. The variations are mainly due to the time spent by the high-frequency channels in the Galactic region, which has very large data gradients, and depends on the satellite scanning strategy. The bandpass-width limit was 80 kb s-1 and was never reached during the mission.

The only parameter that enters the Planck-HFI compression algorithm is the size of the quantization step, in units of [math]\sigma[/math], the white noise standard deviation for each channel. This quantity was adjusted during the mission by studying the mean frequency of the central quantization bin [-Q/2,Q/2], p0, within each compression slice (254 samples). For pure Gaussian noise, this frequency is related to the step size (in units of σ) by [math] \hat Q =2\sqrt{2} \text{Erf}^{-1}(p_0)\approx 2.5 p_0, [/math] where the approximation is valid for p0<0.4. In Planck, however, the channel signal is not a pure Gaussian, since glitches and the periodic crossing of the Galactic plane add some strong outliers to the distribution. By using the frequency of these outliers above 5σ, pout}, simulations show that the following formula gives a valid estimate: [math] \hat Q_\text{cor}=2.5 \frac{p_0}{1-p_\text{out}}. [/math] 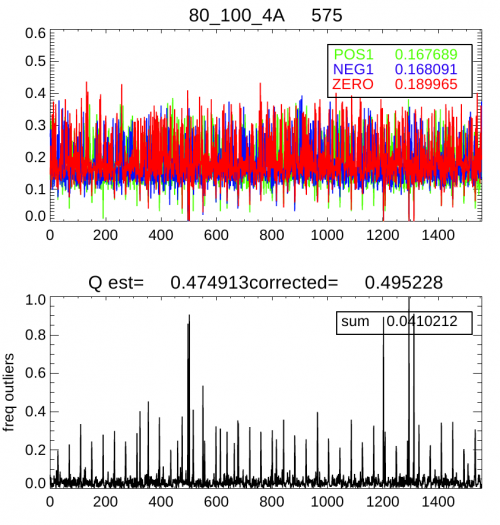 The effect of a pure quantization process of step Q (in units of σ) on the statistical moments of a signal is well known ([1]) When the step is typically below the noise level (which is largely the case for Planck) one can apply the Quantization Theorem which states that the process is equivalent to the addition of uniform random noise in the [-Q/2,Q/2] range. The net effect of quantization is therefore to add quadratically to the signal a Q2/12 variance. For Q≈0.5 this corresponds to a 2% noise level increase. The spectral effect of the non-linear quantization process is theoretically much more complicated and depends on the signal and noise details. As a rule of thumb, a pure quantization adds some auto-correlation function that is suppressed by a factor exp[-4π2(σ/Q)2] [2]. Note however that Planck does not perform a pure quantization process. A baseline is subtracted that depends on the data (specifically the mean of each compression slice value), is subtracted. Furthermore, for the science data, circles on the sky are coadded. Coaddition is again performed when projecting the rings onto the sky (map-making). To study the full effect of the Planck-HFI data compression algorithm on our main science products, we simulated a realistic data timeline, corresponding to the observation of a pure CMB sky. The compressed/decompressed signal was then back-projected onto the sky using the Planck scanning strategy. The two maps were analysed using the \texttt{anafast} HEALPix procedure and both reconstructed Cl were compared. The result is shown for a quantization step Q=0.5. 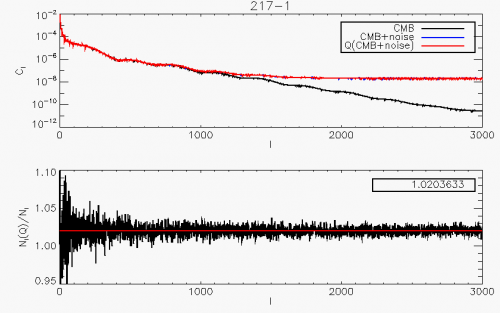 Effect of the Planck compression algorithm on the reconstructed power spectrum (Cl) after data projection and mapmaking, according to the simulation. The upper plot shows the input reconstructed CMB power spectrum (black), the CMB+noise spectrum for this channel (blue, barely visible) and the reconstructed Cl) when including the data compression in the chain (red). The lower plot shows these last two ratios and confirms the white nature of the final added noise at a level that can still be computed by the Quantization Theorem (2% for the value Q=0.5 used here).

It is remarkable that the full procedure of baseline-subtraction + quantization+ring-making + mapmaking still leads to the 2% increase of the variance that is predicted by the simple timeline quantization (for Q/σ=2). Furthermore we checked that the noise added by the compression algorithm is white.

It is not expected that the compression brings any non-Gaussianity, since the pure quantization process does not add any skewness and less than 0.001 kurtosis, and coaddition of circles and then rings erases any non-Gaussian contribution according to the central limit theorem.