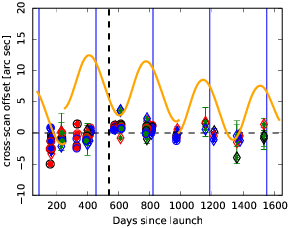 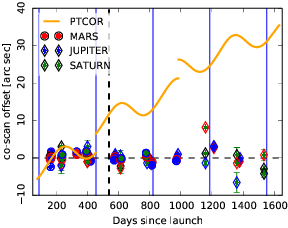 The profiles and locations of the beams are determined from the four observations of Jupiter listed in Table 1. Details are given in Planck-2013-IV[3].

For each beam, the pointing is determined by the location of the maximum of an elliptical Gaussian fit to that beam. This was done for each beam in each single scan. Results are reported, with errors, in Planck-2013-IV[3]. In addition, the beams are stacked in pairs (J1+J2 and J3+J4) and all together (J1J2J3J4) in order to improve the signal-to-noise ratio of the measurements. Before the stacking, each beam is artificially repointed along the direction given by the arithmetic average of the centre of each beam to be stacked. Then a fit is performed again on the stacked beams and the resulting parameters recorded. For single scans it has been found that there is an agreement within 2 arcsec in the pointing direction between J1 and J2. The same agreement occurs between J3 and J4. In contrast, a 15 arcsec systematic deviation of the beam centre was detected when comparing J1+J2 to J3+J4. The figure below shows the reconstructed beam positions and errors in the line-of-sight frame magnified by a factor of 100. The shift is evident for the 70 GHz beams, as well as in all the J1+J2 and J3+J4 stacked beam centres. The change in the pointing has been found mainly in the scan direction (i.e., [math]v[/math]-coordinate). To account for this pointing shift, we apply two pointing solutions for LFI. The first focal plane calibration is valid from OD91 to OD540 and is based on the J1+J2 beam pointing determination. The second calibration is valid from OD541 to OD563 and is based on the J3+J4 beam pointing calibration. 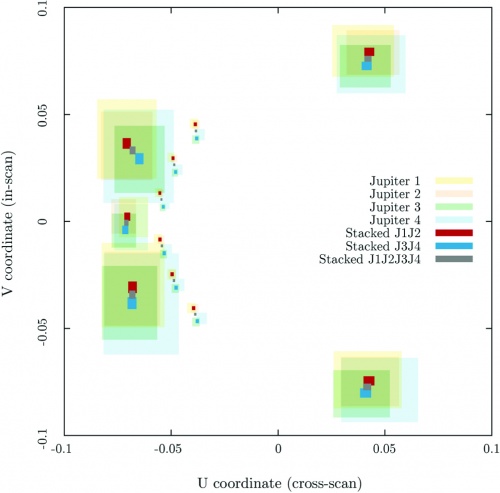