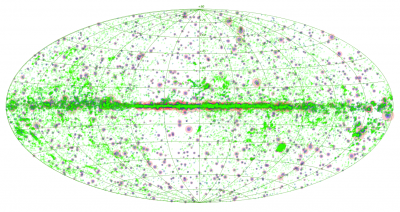 The data obtained from the Planck nominal mission between (2009 August 12 and 2010 November 27) have been processed into full-sky maps by the HFI and LFI Data Processing Centres (DPCs). A description of the processing can be found in #planck2013-p02,#planck2013-p03 Planck-2013-II Planck-2013-VI . The data consist of two complete sky surveys and 60% of the third survey. This implies that the flux densities of sources obtained from the nominal mission maps are the average of at least two observations. The nine Planck frequency channel maps are used as input to the source detection pipelines. The relevant properties of the frequency maps and main parameters used to generate the catalogues are summarized in Table 1.

The union catalogue is contained in a file called COM_PCCS_SZ-union_Rx.xx.fits, where x.xx is the release number.

The individual pipeline catalogues are contained in FITS files called COM_PCCS_SZ-{pipeline}_R1.11.fits, where {pipeline} is the name of the pipeline (MMF1, MMF3, or PwS). The structure of the FITS files is as follows:

The mask used to construct the catalogue is contained in a file called COM_PCCS_SZ-unionMask_2048_R1.10.fits. It is in GALACTIC coordinates, NESTED ordering, NSIDE=2048

The multifrequency information from Planck allows some basic classification of the sources to be undertaken. In the Galactic plane, at frequencies below 100 GHz, the majority of the sources are dominated by synchrotron or free-free emission. At the higher frequencies, the sources are almost exclusively dominated by thermal dust emission. At high Galactic latitudes however, the synchrotron sources dominate the source counts to 217 GHz with dusty sources being the primary source population at 353 GHz and higher. Recent attempts to classify a subset of the Planck 857 GHz sources at high latitudes based on cross-correlations with sources in other catalogs such as WISE and SDSS, found that almost half of them are associated with stars and low-redshift galaxies while a significant fraction (44%) might be interstellar medium features #Johnson2013. 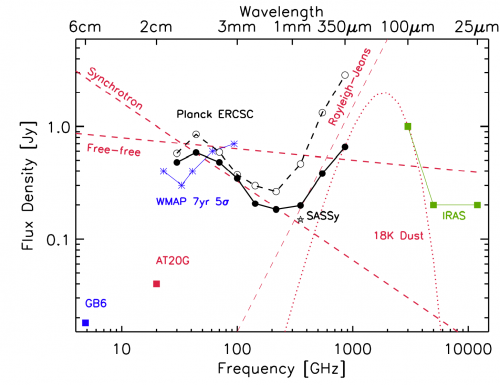 The figure shows the ERCSC flux density limits, quanitfied as the faintest ERCSC source at |b|<10 deg (dashed black line) and at |b|>30 deg (solid black line), compared to those of other wide area surveys (#planck2011-1-10 Planck early paper VII ). Also shown are spectra of known sources of foreground emission as red lines. The ERCSC sensitivity is worse in the Galactic plane due to the strong contribution of ISM emission, especially at submillimeter wavelengths. At face value, the WMAP and Planck flux density limits appear to be comparable at the lowest frequencies, but the Planck ERCSC is much more complete as discussed in #planck2011-1-10 Planck early paper VII .