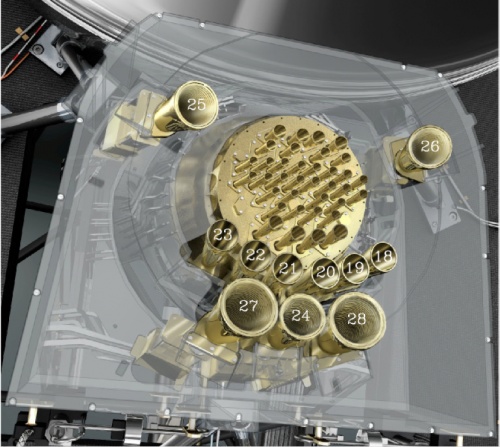 Figure 1. A CAD model of the Planck focal plane, which is located di- rectly below the telescope primary mirror. It comprises the HFI bolometric detector array (small feed horns on golden circular base) and the LFI radio receiver array (larger feed horns around the HFI). The box holding the feedhorns appears to be transparent in this view, to also show the elements inside and behind it. ESA/Thales.

Once the location and orientation of the feed horns, as well as their inner corrugation profile, had been properly defined, we carried out a full characterisation of the optical performance using electromagnetic simulations devoted to computing the LFI beams. The beam solid angle, Ω[math]_A [/math], of an antenna is given by

For most antennas, the normalized power pattern has consider- ably larger values for a certain range of both θ and φ than for the remaining part of the sphere. This range is called the main beam and the remainder is called the sidelobes or back lobes. Obviously the quality of an antenna as a directional measur- ing device depends on how well the power pattern is concen- trated in the main beam. The received power originating in re- gion outside the main beam is called straylight, and it is one of the major sources of systematic effects in the Planck observa- tions and for CMB experiments in general. In the next section, the sidelobes of the LFI beams are presented, together with the straylight-induced noise evaluated from these beams. The sep- aration of the power pattern into a main beam and sidelobes can be somewhat arbitrary and is basically governed by con- vention. Different definitions of these regions could in princi- ple be used: electromagnetic definitions, science-related defini- tions, and simulation-related definitions. In the framework of the present simulations, the main beam region was defined by tak- ing care that not only the relevant main beam characteristics are computed (angular resolution, ellipticity, directivity, cross polar discrimination factor, and so on), but also that the main beam distortion, at a level of about –60 dB (mainly due to the off-axis location of the LFI feed horns), can be evaluated. This involves longer computational times but ensures a superior knowledge of the systematic effects related to the LFI main beams. The main