NILC is a linear method for combining the input frequency channels. It implements an ILC with weighting coefficients varying over the sky and over the multipole range up to [math]\ell=3200[/math] and it does so using 'needlets' which are spherical wavelets. A special procedure is used for processing the coarsest needlet scale which contains the large scale multipoles.

Input channels
In this work, the NILC algorithm is applied to all Planck channels from 44 to 857 GHz omitting only the 30 GHz channel.
Pre-processing of point sources
Identical to the SMICA pre-processing.
Masking and inpainting
The NILC CMB map is actually produced in a three-step process. In a first step, the NILC weights are computed from covariance matrices evaluated using a Galactic mask removing about 2 % of the sky (and is apodized at 1◦). In a second step, those NILC weights are applied to needlet coefficients computed over the complete sky (except for point source masking/subtraction), yielding a NILC CMB estimate over the full sky (except for the point source mask). In short, the weights are computed over a masked sky but are applied to a full sky (excluding point sources). In a final step, the pixels masked due to point source processing are replaced by the values of a constrained Gaussian realization (inpainting).
Spatial localization
The boundaries of the zones used for spatial localisation are obtained as iso-level curves of a low resolution map of Galactic emission.
Beam control and transfer function
As in the SMICA processing, the input maps are internally re-beamed to a 5′ resolution, so the resulting CMB map is automatically synthesized with an effective Gaussian beam of five arcminutes, according to the unbiased nature of the ILC.
Using SMICA recalibration
In our current implementation, the NILC solution uses the values determined by SMICA for the CMB spectrum.

The input maps used are all the Planck frequency channels. In particular, for intensity, we have cleaned the 100, 143 GHz and 217 GHz maps using four templates. Three or them are constructed as the difference of the following Planck channels (smoothed to a common resolution to remove the CMB contribution): (30-44) GHz, (44-70) GHz, (545-353) GHz and a fourth template given by the 857 GHz channel (smoothed at the resolution of the 545 GHz channel). For polarization we clean maps at frequencies of 70, 100 and 143 GHz using three templates for each channel. In particular, we use (30-44) GHz smoothed to a common resolution, (353-217) at 10', and (217-143) GHz at 1 degree resolution to clean the 70 and 100 GHz maps. To clean the 143 GHz channel, the last template is replaced by (217-100) GHz at 1 degree resolution. Before constructing the templates, for both intensity and polarization, we perform inpainting in the positions of detected point sources to reduce their contamination of the final map.

Inputs
All nine Planck frequency channels from 30 to 857 GHz, harmonically transformed up to [math]\ell = 4000 [/math].
Fit
In practice, the SMICA fit, i.e. the minimization of the fourth equation, is conducted in three successive steps: We first estimate the CMB spectral law by fitting all model parameters over a clean fraction of sky in the range [math] 100 ≤ \ell ≤ 680[/math] and retaining the best fit value for vector [math] \mathbf{a}[/math]. In the second step, we estimate the foreground emissivity by fixing a to its value from the previous step and fitting all the other parameters over a large fraction of sky in the range [math] 4 ≤ \ell ≤ 150[/math] and retaining the best fit values for the matrix [math] \mathbf{A}[/math]. In the last step, we fit all power spectrum parameters; that is, we fix [math]\mathbf{a}[/math] and [math]\mathbf{A}[/math] to their previously found values and fit for each [math] C_\ell [/math] and [math]\mathbf{P}_\ell [/math] at each [math]\ell[/math].
Beams
The discussion thus far assumes that all input maps have the same resolution and effective beam. Since the observed maps actually vary in resolution, we process the input maps in the following way. To the [math]i[/math]-th input map with effective beam [math]b_i(\ell)[/math] and sampled on an HEALPix grid with [math]N^i_{side}[/math], the CMB sky multipole [math]s_{\ell m}[/math] actually contributes [math]s_{\ell m}a_i b_i(\ell) p_i(\ell)[/math], where [math]p_i(\ell)[/math] is the pixel window function for the grid at [math]N^i_{side}[/math]. Seeking a final CMB map at 5-arcmin resolution, the highest resolution of Planck, we work with input spherical harmonics re-beamed to 5 arcmins, [math]\mathbf{\tilde{x}}_{\ell m} [/math]; that is, SMICA operates on vectors with entries [math]x ̃^i_{\ell m} = x^i_{\ell m} b_5(\ell) / b_i(\ell) / p_i(\ell)[/math], where [math]b_5(\ell)[/math] is a 5 arcmin Gaussian beam function. By construction, SMICA then produces an CMB map with an effective Gaussian beam of 5 arcmin (without the pixel window function).
Pre-processing
We start by fitting point sources with SNR > 5 in the PCCS catalogue in each input map. If the fit is successful, the fitted point source is removed from the map; otherwise it is masked and the hole in-painted. This is done at all frequencies but 545 and 857 GHz, where all point sources with SNR > 7.5 are masked and in-painted.
Masking and in-painting
In practice, SMICA uses a small Galactic mask leaving 97% of the sky. We deliver a full-sky CMB map in which the masked pixels (Galactic and point-source) are replaced by a constrained Gaussian realization.
Binning
In our implementation, we use binned spectra.
High [math]\ell[/math]
Since there is little point trying to model the spectral covariance at high multipoles, because the sample estimate is sufficient, SMICA implements a simple harmonic ILC at [math]\ell \gt 1500[/math]; that is, it applies the filter (second equation) with [math]\mathbf{R}_\ell = \mathbf{\hat{R}}_\ell[/math]. 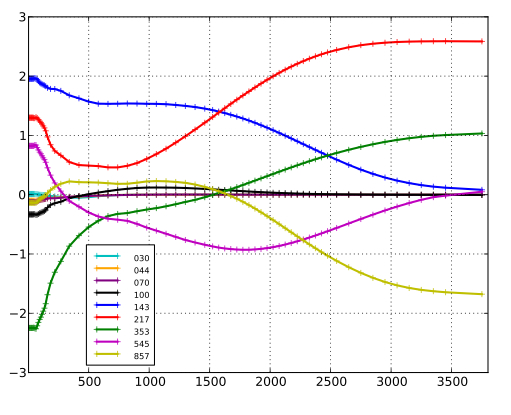