Difference between revisions of "HFI cryogenics"

The HFI dilution cooler cools the bolometers down to 0.1 K through the dilution of 3He into 4He and the intermediate optical plate to 1.4 K through Joule-Thomson expansion of the 3He and 4He mixture. Two stages of PID regulation are included on the 0.1K stage. The first one (PID1) is at the dilution cold end itself and provides stability on long timescales. When no thermal perturbation is applied to the bolometer plate, the PID1 alone provides the required stability. A passive thermal filter is mounted between the dilution cold end and the bolometer optical plate. It gives a thermal time constant of several hours between these stages. A second regulation system (PID2) is on the bolometer plate, with a similar time constant. The dilution cooler is described in detail in section 2.3.3 of Planck-Early-II[1]. 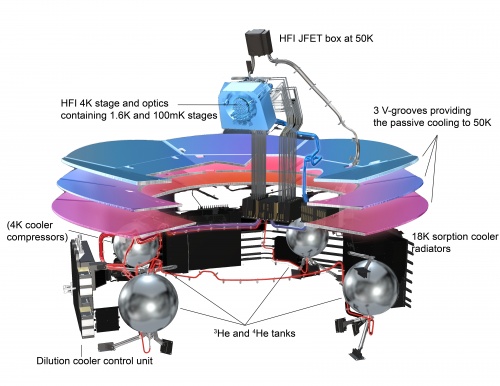 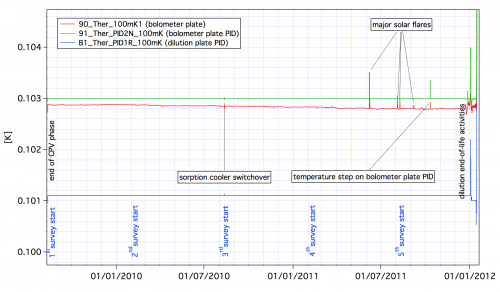 100mK stages temperatures during the mission

However, the cosmic particles interactions with the 0.1K stage induced both temperature fluctuations of the 0.1K plates and glitches on the thermometer measurements. 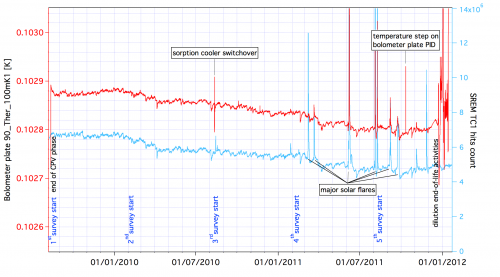 The 1.4K stage is very stable and given the very low coupling coefficients between the 1.4K optical components and the detectors no effect can be measured on the signal. Detailed thermal analysis of the in-flight stability of the dilution cooler can be found in section 5.4 of Planck-Early-II[1]. 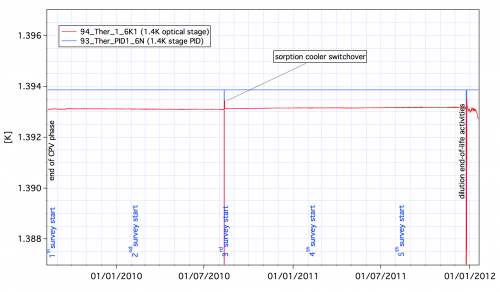 The HFI 4K Joule-Thomson (J-T) cooler produces a temperature of 4K for the HFI 4K stage and optics and the precooling of the dilution gases. Full description of the 4K cooler can be found in section 2.3.2 of Planck-Early-II[1].

The two mechanical compressors produce micro-vibrations and also induce electromagnetic interference affecting the science signals of bolometers. The risks associated with these effects were taken into account early in the design of the HFI by phase-locking the sample frequency of the data to a harmonic of the compressor frequency. The removal of these interferences is addressed in the 4K cooler lines variability section.

The 4K J-T cooler compressor amplitude was set to 3450 micrometers during the CPV, and was maintained to this value during all the mission. Its cooling power is very stable and gives enough margin to cancel out the fluctuations and drifts induced by the sorption cooler fluctuations and adjustments. The PID stabilizing the temperature of the HFI optics is regulated at 4.81K using a power around 1.8mW.

Details on the in-flight performance of the 4K J-T cooler can be found in in section 5.3 of Planck-Early-II[1]. 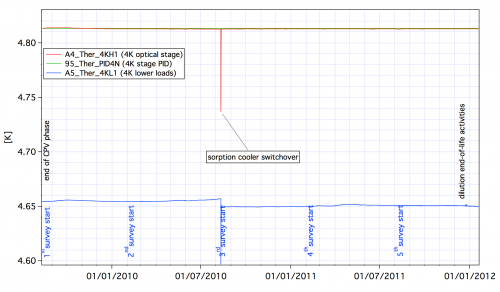