The Planck best-fit CMB temperature power spectrum, shown in figure below, covers the wide range of multipoles l=2-2479. Over the multipole range l=2–49, the power spectrum is derived from a component-separation algorithm, Commander, applied to maps in the frequency range 30–353 GHz over 91% of the sky (\cite P06). The asymmetric error bars associated to this spectrum are the 68% confidence limits and include the uncertainties due to foreground subtraction. For multipoles greater than l=50, instead, the spectrum is derived from the CamSpec likelihood (\cite P08) by optimally combining the spectra in the frequency range 100-217 GHz, and correcting them for unresolved foregrounds. Associated 1-sigma errors include beam and foreground uncertainties. 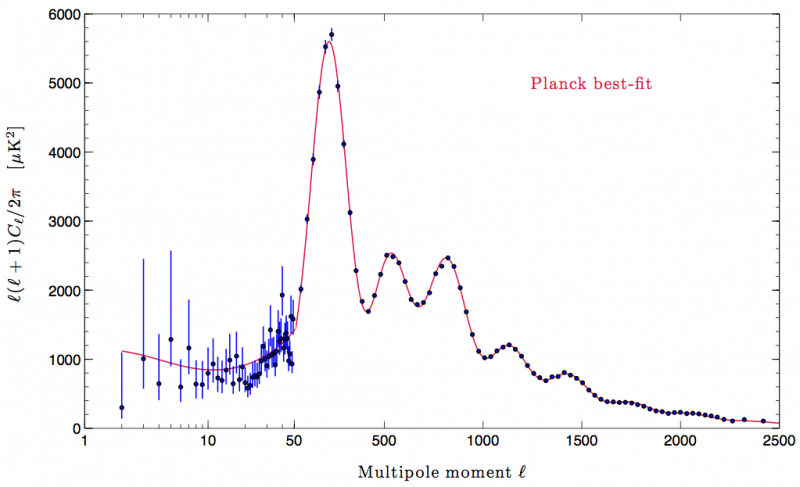 Detailled description of the installation and usage of the likelihood code and data is provided in the package.

The commander likelihood is covering the multipoles 2 to 49. It uses a semi-analytic method to sample the low-l Temperature likelihood on an intermediate product of one of the component separated maps. The samples are used along with an analytical approximation of the likelihood posterior to do the likelihood computation in the code. See #planck2013-p08 section 8.1 for more details.

The lowlike likelihood is covering the multipole 2 to 32 for Temperature and Polarization data. Planck is not releasing any polarisation data in this release. We are using here the WMAP9 polarization map which are included in the data package. A temperature map is needed to perform the computation nevertheless, and we are using here the same commander map. The likelihood is computed using a map based approximation at low resolution and a master one at intermediate resolution, as in WMAP. The likelihood code actually calls a very slightly modified version of teh WMAP9 code. This piece of the likelihood is essentially providing a prior on the optical depth and has almost no other impact on cosmological parameter estimation. As such it could be replaced by a simple prior, and user can decide to do so, which is one of the motivation to leave the three pieces of the CMB likelihood as different data packages. See #planck2013-p08 section 8.3 for more details.

The lensing likelihood is covering the multipoles 40 to 400. It uses the result of the lensing reconstruction. It uses a quadratic approximation for the likelihood, with a covariance matrix including the marginalized contribution of the beam transfer function uncertainties, the diffuse point source correction uncertainties and the cosmological model uncertainty affecting the first order non-gaussian bias (N1). The correlation between Temperature and lensing one is not taken into account. Cosmological uncertainty effects on the normalization are dealt with using a first order renormalization procedure. This means that the code will need both the TT and $\phi\phi$ power spectrum up to l=2048 to correctly perform the integrals needed for the renormalization. Nevertheless, the code will only produce an estimate based on the data between L=40 to 400. See #planck2013-p12 section 6.1 for more details.