The Planck best-fit CMB temperature power spectrum, shown in figure below, covers the wide range of multipoles [math] \ell =2-2479[/math]. Over the multipole range [math] \ell =2–49[/math], the power spectrum is derived from a component-separation algorithm, Commander, applied to maps in the frequency range 30–353 GHz over 91% of the sky #planck2013-p06. The asymmetric error bars associated to this spectrum are the 68% confidence limits and include the uncertainties due to foreground subtraction. For multipoles greater than l=50, instead, the spectrum is derived from the CamSpec likelihood #planck2013-p08 by optimally combining the spectra in the frequency range 100-217 GHz, and correcting them for unresolved foregrounds. Associated 1-sigma errors include beam and foreground uncertainties. 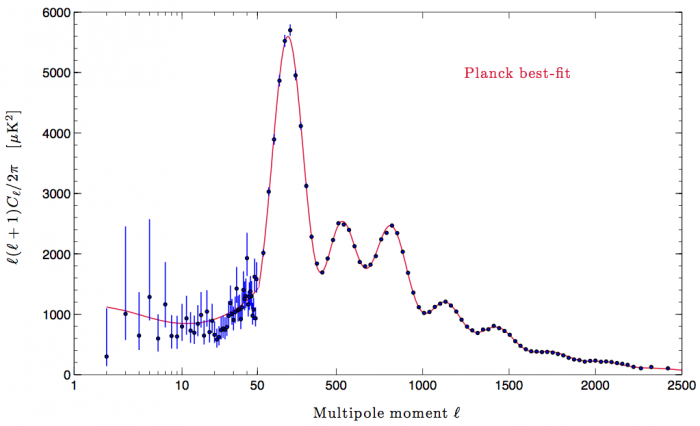 The code is based upon some basic routine from the libpmc library in the cosmoPMC code. It also uses some code from the WMAP9 likelihood for the lowlike likelihood. It also includes codes from the ACT&SPT #dun2013,#Keis2011,#Reic2012 dun2013, Keis2011 Reic2012 multifrequency likelihood that has been used by the planck collaboration in the Parameter paper. Data is not included and has to be downloaded here. The other code has been specificly written for the Planck data.