The "HEALPix Rings", or HPRs, produced by HFI for the PR3 data release, are an intermediate product of the HFI SRoll mapmaking process. HPRs are produced by binning the TOI data of a pointing period onto a band of HEALPix map pixels. As a result of this binning, the data volume is reduced by nearly a factor of 20

For each valid bolometer, HPRs are build for the following quantities.

Signal
The actual signal, after the TOI processing and the Sroll solution, after removal of the total dipole and of the bandpass correction.
Bandpass
This is the bandpass correction that is calculated and removed from the TOI before building the signal HPR.
Dipole
This is the total dipole, i.e., solar + orbital, which is what is used for the flux calibration and then removed from the TOI signal.
Hit count
The number of TOI samples binned into each ring pixel.
Phase
The 1-dimensional phase along the ring.
φ, θ, and ψ coordinates
The three coordinates, corresponding to the mean valuees for the TOI samples actually binned into that pixel, as opposed to the pixel coordinates given by the pixelization scheme, and including the position angle ψ.

The bandpass and dipole HPRs should be added to the signal HPRs if the user wants to recalculate the bandpass correction or to redo the calibration using a different determination of the dipole. Otherwise they can be ignored.

The full mission (thus rings 240 to 26050) are stored in a single file as an image of Nrings rows × Npixels columns (25811 × 27664). The image is stored into a single extension of type "IMAGE". The coordinate HPRs are encoded as double precision floating point values in order to maintain the required accuracy; the others are single precision. File sizes are 5.4 and 2.7 GB, respectively.

Note that the pixels of each ring are stored in HEALPix order, not by coordinates or phase. To view the signal along the ring, one can plot it versus phase; a few examples are shown below, where the dipole that has been removed is also shown. 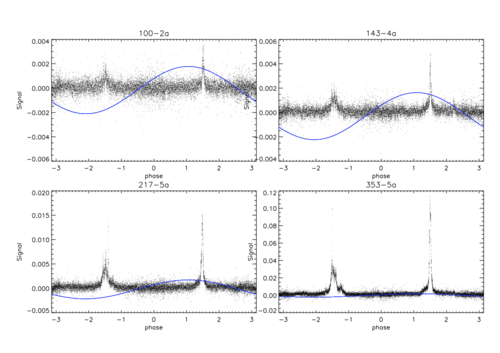 Signal and total dipole versus phase.