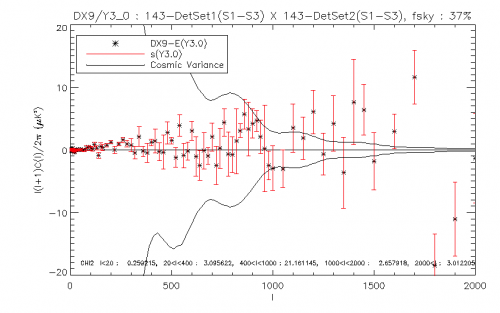 Similar to but distinct from popcorn noise, small baseline jumps were occasionally found in the data streams. These data are usually corrected by subtracting a constant baseline before and after the jumps. About 320 jumps are found per bolometers, this represents 16 jumps per day for hFI, i.e. 12800 over the mission lifetime. While the detection efficiency of the biggest jumps is extremely high, the question of the impact of the jumps with amplitudes lower than 0.5% of the standard deviation of signal is still open. Desire simulations are about to be produced to answer this.

The "Thruster signal" is not present for all bolometer for 100, 143, 217 GHz. After the peak "Thruster signal", the relaxing time "normal noise" is about the same for all bolometers over channels, i.e. 12 seconds, but amplitude is different. Thus the effect of the manouver has decayed away long before the end of the "unstable" period, which would be minutes after the first thrust.

This effect can be neglected, and does not need to be included in the simulation runs.

The Electrical Cross-Talk consists in the electrical contamination received by a given channel and coming from the other channels of the focal plane. This is mainly driven by the locations of the channels inside the electronic devices of the readout chain, and not by their locations in the focal plane.

This effect has been first measured during the ground calibration phase, and then during the inflight 'Calibration, Performance and Validation' phase (CPV Phase) after launch. These two sets of measurements agree to show that the level of electrical cross-talk is smaller than 0.01% for SWBs and 0.1% for PSBs. These estimates have been confirmed by the analysis of the glitches. While the thousands of detected glitches have been flagged for a given channel, the signal of the neighbor channels have been stacked at the same dates of the glitch flags to reveal the amount of electrical contamination coming from the glitched signal. Strong glitches have also been used in the same scope in a second study. These two analysis based on glitches give the same estimates of electrical cross-talk as measured during calibration phases.

Hence the electrical cross-talk has a negligible impact on science data, except probably for PSBs on which further Desire simulations will be carried out.

It has been shown using planets crossing that the optical cross-talk is negligible, with an upper limit of 0.01%. This effect can be neglected in the total budget error, without any end-to-end simulation.